In late October I made a quick trip to the Trinity River Audubon Center and came across a wonderful insect called the scorpionfly.  I was very pressed for time so only managed to capture a single specimen, but just a few days later Professor Jeff Hughes walked into my lab with another one.

Coming upon a scorpionfly for the very first time can be a bit of a surprise.  The elongated beak of the male is pretty weird looking, not to mention what appears to be a scorpion-like stinger.  But never fear - they are harmless.  In general, scorpion flies are scavengers that eat dead insects.  And the stinger is actually the male reproductive organ. (Which in a way makes it even more scary.) Scorpionflies belong to the order Mecoptera.

One reason I really like scorpionflies is that they are instantly identifiable, mainly because they remind me of my favorite part of Mad Magazine - the Spy vs Spy cartoons that were drawn in the margins of the magazine's pages. 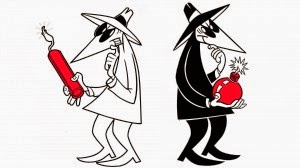 Scorpion flies are harmless to humans.  Most species either prey on small insects or eat the bodies of dead insects.  The long snout allows them to feed in narrow places and on small prey.

Mecoptera is a very old order of insects, dating back to the Permian period 299 to 251 million years ago. During the Permian, scorpion flies were the most abundant and diverse insects that went through complete metamorphosis and are probably ancestral to today's dipterans (flies) and lepidopterans (moths and butterflies).


Now for some scorpionfly sex.


The male attracts the female by releasing pheromones from glands within the enlarged genital segment.  Before he does this he prepares a nuptual gift of a dead insect. When the female arrives she begins feeding and he grabs on to the edge of her forewing and while she eats he inseminates her.  (If only it were that easy for humans.)

I have known about scorpionflies for many years and have always enjoyed finding them, but recently the Eastfield library added a book called Planet of the Bugs by Scott Shaw on insect evolution that really opened my eyes to just how cool scorpionflies are.  If scorpionfly ancestors hadn't survived a couple of mass extinctions, we might not have flies and butterflies around today.  It is very cool to realize that these insects were buzzing around long before the dinosaurs and are still here.

My thanks to Michael Haas, a Ph.D. student at the  Department of Entomology at the State Museum of Natural History Stuttgart, Germany for pointing out a major error on the previous version of this blog posting.  I had identified a female Ichneumonid wasp, probably the genus Compsocryptus, as a female scorpionfly because of similar wing coloration.  I have removed those images from this posting to avoid confusion.

Science is based on the open exchange of ideas and information, and the internet provides a global reach.  Thanks for taking the time to let me know of my error, Michael.  I learned something new today.

Shaw, S. R. (2014). Planet of the bugs: Evolution and the rise of insects. Chicago, IL:
University of Chicago.

All images are covered by a Creative Commons License.  They may be downloaded, used, or modified with attribution to Eastfield College, Mesquite, TX, but may not be sold.
Posted by Murry Gans at 2:00 PM