Sex in the weeds: When a young beetle's fancy turns to love.

My current focus in the lab is with Lixus scrobicollis, the ragweed weevil.  As I was walking up to my study site at the Trinity River Audubon Center in early June I saw what at first glance appeared to be bees hovering over the tops of the ragweed plants.

This made absolutely no sense because the ragweed plants hadn't flowered and are wind pollinated - their flowers, when they make them, don't have petals.

A closer look revealed not bees, but some small, orange beetles.  I watched the beetles land on the ragweed, but they weren't really showing any interest in it - they were just sitting there.  As I walked around more I discovered the beetles swarming on another plant called Illinois Bundle Flower (Desmanthus illinoensis) growing alongside the ragweed.  The females were happily feeding on the flowers and flower buds of the Bundle Flower, but the males were intensely interested in mating with the females.  The females seemed to be paying absolutely no attention the activity of the males.

I was so fascinated watching the beetles swarm, that, like a rookie, I didn't notice I was standing in a fire ant mound.  They quickly let me know.  After a few minutes of hopping around and trying to rid myself of fire ants, I moved to a better location and took some images.

Here is a short video I took of the action.


I have to  admit that I struggled with trying to identify the beetle for several days, but I am lucky because I know people who can help.  Dana See, a Lab Assistant in our biology labs is an outstanding naturalist and she came up with a classification, Anomoea flavokansiensis, in less than an hour.

The scientific name is much longer than the beetle itself!

I asked her how she did it and she told me she did a Google search.  She picked much better search terms than I did so she wins.  I feel a little better since the genus Anomoea isn't in any of my entomology books.

Here are some images I took in the field. 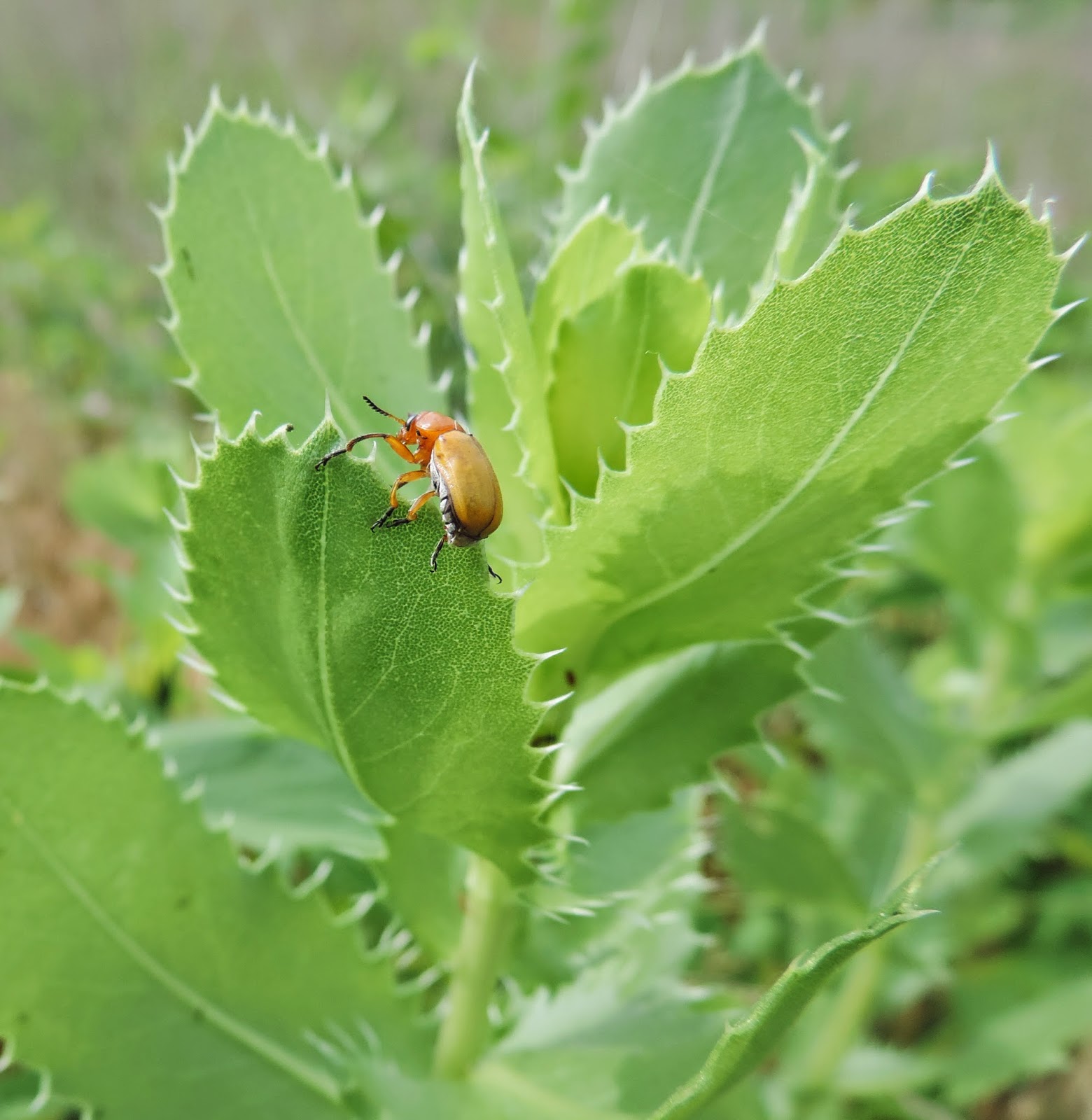 While I was observing the beetles, a group of young students came by my study site.  They were competing to see how many different species they could find so I showed them the beetles.  They quickly told me they had already seen them and wanted to know if I had anything else to offer. (Note to self - When talking to young people, don't point out that "the beetles are making more beetles" unless you are ready to explain how.  I wasn't and didn't!)

I found it interesting that these beetles were not on every Bundle Flower plant I saw that day. Why this particular plant and not others?  Location near water, maturity of the flower buds, detection of a chemical signal?  The female beetles are obviously interested in feeding on the flowers, but were both males and females attracted to the plant, or were the males attracted to the feeding females? Do females release a pheromone when they find a good source of food? If so, what is that pheromone?

Interesting questions, but for now my pursuit of ragweed weevils continues.

This work is covered by a Creative Commons Attribution 4.0 International License. Images may be used or modified with attribution to Eastfield College, Mesquite, TX.  They may not be used commercially.

I hope you enjoyed seeing these little beetle making more beetles!  I saved some specimens for the scanning electron microscope and look forward to sharing those images with you.

I welcome any comments you may have.