Yesterday's blog post took a look at our not-so-little friend shown below using a camera and dissecting scope.  Now it is time to take a look with the scanning electron microscope.

Say hello to my little friend. 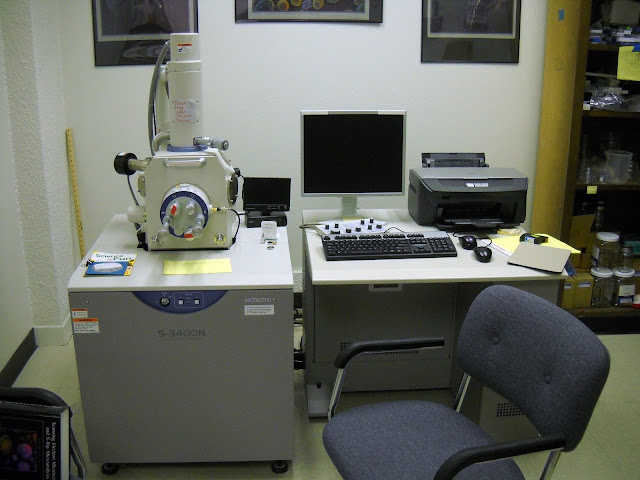 One of the things that amazed me when I saw this insect with the SEM is how toughly built it is - lots of strong skeletal elements, including spikes.  Notice also the long, piercing mouthpart tucked under the body.  Also visible on the abdomen to the far right of the image are two of the spiracles the bug uses for breathing﻿.

A head-on image.  Notice the raised horn between the antennae and the bed of small, chitinous spikes across the surface of the thorax behind the head.﻿

Good to see you!  A closer look at the face and the horn.

The bright white specks in the image are actually dirt, dust, or possibly plaster flakes from the insect killing jar.
﻿

For this image I placed the insect on its back. The two almost vertical structures to the left and right of the image are front legs.  Notice the strange structure of the mouthparts.  The next two images zoom in on parts of these.

﻿Top of the mouthpart - where it connects to the head.

OK.  I will admit that I have no idea why this structure looks like this, but of course that is how science works.  You find something you didn't know about, start asking questions, and then work at finding the answers.

﻿A dorsal view - look straight down on the insect.  In this image you can see the two compound eyes and the two simple eyes next to them.  Besides lots of hairs, you can also see a pair of spikes in the center of the thorax and along both edges.  This species must have a pretty tough life to need such armor.  Something else to find out about.

﻿A close up of a couple of small spikes that cover the dorsal surface of the thorax.  You can see scratch marks on the top spike.

This is one of the spikes that extend from the margin of the thorax. From the scale bar on the image you can tell that the spike is approximately 300 m﻿icrons long - about 1/3 of a millimeter (1/10 of an inch).

This image shows the side of the abdomen near its connection with the thorax.  The edges of the wings are visible at the top.  Here I discovered two interesting structures - most likely sensory organs.  (I am going to have to go to the library and hit the Internet - lots to find out here.)

A closer look at the upper sensory structure ﻿- about 300 microns (1/10 of an inch) at its widest point.

A fine mesh of hairs covers this opening.  Why?﻿

This is the lower opening - this could be a spiracle of breathing.  Not the rough structure of the insect exoskeleton.

As noted in the previous blog, insects breath via a series of tubes called trachea, that permeate their bodies.﻿  These trachea open directly to the atmosphere through holes called spiracles.  This image shows two of those spiracles on the side of the abdomen.

This image shows the tarsal claws on one of the legs.  The two sac-like structures to the right of the claws are sense organs.  Also, notice the hairs on the part of the leg shown at the bottom of the image.

Having worked in the SEM lab for about 6 month now I realize that even though the SEM will let me greatly magnify specimens, sometime lower magnifications can show the most.  The highest magnification on this series of images is only 200x - well within the range of a light microscope.  So why use the SEM - because of  its ability to show excellent depth of field and razor sharp focus.

As always, you are invited to visit the SEM Lab at Eastfield College, either in person or electronically. I look forward to hearing from you.