I have always been disappointed with fermentation experiments.  Usually, we measure the carbon dioxide produced, but aerobic respiration also gives off carbon dioxide, so it is a pretty pointless experiment.

So this year I decided to distill, collect, and burn the ethyl alcohol that is supposed to be produced by fermentation to show my AP Biology students that it works.

First I had my students ferment some Karo syrup.  They mixed 40 ml of Karo (light Karo works best - don't ask me why, it just does) and 80 ml of water.  They poured this solution in to a 1000 ml flask and added a package of dry, active yeast.  They then stretched a balloon across the top of the flask as a fermentation lock, and also so they could see that a gas was being given off.


The 6th grade Science teacher down the hall had a book called Caveman Chemistry (Amazon) which she loaned me.  It showed a simple to build and use a still. 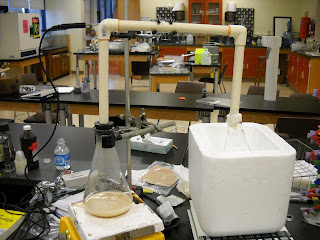 It is a pretty simple contraption.  I used CPVC (the kind made for hot water) - 2 nine inch long pieces and a twelve inch long piece in the middle.  Notice the Vernier temperature probe inserted into a hole in the first elbow. Also notice the slight downward slant of the horizontal piece to allow the alcohol to move toward the flask in a cooler of ice.  The hardest part of this whole thing was making a hole in the stopper large enough for the CPVC pipe.

Here is how it works.  Ethanol boils at 78 degrees C and water boils at 100 degrees C.  When you mix them together the boiling point for the solution is about 90 degrees C.  The trick is to get the first elbow, where the temperature probe is, up to about 83 degrees WITHOUT ALLOWING THE SOLUTION TO BOIL OVER AND MAKE ONE BIG MESS.  (I found this out the hard way.)  Be patient and don't walk away.  And be ready to keep adjusting the temperature of the hot plate.  It takes it a while to get going, but then proceeds pretty fast.

The tube leading up from the flask has a temperature gradient.  Let's assume you have the elbow temp at 83 - down at the flask end of the tube it is closer to 90.  As the water vapor rises it encounters cooler and cooler temperatures, condenses, and drips back into the flask.  The ethanol, however, makes it around the corner where it condenses and is moved toward the collecting flask.

You will need at least an hour to run this.  I started it during my lunch period so it would be making alcohol when my students arrived for class.

From the 120 ml of Karo and water I was able to recover about 3 ml of ethanol.  I know chemists do distillations all the time, but this was my first and I was pretty excited when I saw that first, clear drop on the CPVC.

Now for the fun.  If it is ethanol, it should burn.

There is nothing like the excitement of trying something new.  I had a lot of fun and my students just might remember what fermentation is.